Prior to 1990, most of the imports were from the erstwhile Soviet bloc and were always on government-to-government basis. India had no other source for procuring weaponry. However, the breakup of the Soviet Union caught India unprepared. It had to seek alternate sources and soon realised that procurement of new weaponry in an environment of open multi-vendor competition is a long, convoluted and arduous process. A need was felt to evolve a detailed and well-structured procedure to facilitate decision making and ensure expeditious procurements.

Consequently, Defence Procurement Procedure 1992 (DPP-1992) came into being in February 1992.  However, it suffered from some major deficiencies, which affected its implementation. After the Kargil war, a new set-up was established in the Ministry of Defence (MoD) in October 2001. Soon thereafter, a comprehensive procurement procedure DPP-2002 was put into effect on 30 December 2002. It has since been revised eight times and the current version is DPP-2016.

The defence procedure mandates that all procurements should be carried out in an open, transparent and free competitive environment with maximum number of vendors participating in the bidding process. The procedure repeatedly stresses the importance of generating maximum competition.

Unfortunately, despite the fact that DPP has been in operation for the last 15 years, it has failed to deliver, sporadic euphoria notwithstanding. India has not been able to carry out any major defence procurement in a competitive environment without ensuing controversies. Every inked deal has been on single-vendor government-to-government basis, showing total failure of the much-vaunted procurement procedure. During the period 2003-14, only one major deal was concluded in open tendering – helicopters for VVIPs and it had to be terminated prematurely in ignominy due to allegation of corruption and procedural irregularities.

Two issues get flagged. The first one relates to India’s inability to put the system on an even keel; 15 years is a long period to streamline any procedure. Although a public policy should be dynamic and interactive in nature, it should provide reasonable continuity. Biennial reviews of DPP create an environment of uncertainty and unpredictability.  Entrepreneurs get deterred by frequent changes in various provisions. The second issue is about the desirability of excessive dependence on government-to-government deals to meet critical requirements.

Failure to Evolve a Workable Procedure

DPP lacks focus, coherence and rationality. Worse, it has been encumbered with many irrelevant provisions. Through frequent reviews, MoD has been firing shots in the dark to discover the elusive ‘winning formula’. Unfortunately, it does not possess the necessary acumen, expertise and domain knowledge. It is only in India that drafting of the procedure that governs defence procurements worth billions of dollars is assigned to functionaries who possess no knowledge of economics, financial management and military systems. No wonder that some provisions of the procedure defy logic and are in fact detrimental to Indian interests.
The whole procurement regime is characterized by bureaucratic stranglehold. Very limited powers have been delegated to the services. Bureaucrats call all the shots. To start with, all procurement proposals are submitted to the Defence Acquisition Council or the Defence Procurement Board for approval. Both function under MoD. The Acquisition Wing of MoD is the executive arm and is again headed by a bureaucrat. It controls issuance of tenders, opening of technical/commercial proposals, conduct of commercial negotiations and signing of the contract. Even the list of vendors who can be called for field trials is approved by MoD. Furthermore, MoD retains the authority to accept Staff Evaluation Report that shortlists technically successful vendors. In other words, bureaucrats of MoD have made the whole system totally captive to their dictates.

In addition, the entire procurement regime functions without any semblance of jointness between MoD and the Services Headquarters (SHQ). MoD initiates procurement process on the basis of parameters evolved by SHQ. Thereafter, there is no dialogue between the two. No market survey is ever carried out to provide feedback to SHQ as regards cost-performance relationship of equipment in the world market. SHQ is never asked to reconsider some parameters that may result in huge savings. Most shockingly, after field trials and staff appraisal, SHQ cannot prioritise its selection. All equipment that meet SQR are considered at par. It is for MoD to select the cheapest out of them. In the process, the country suffers as it misses an opportunity to buy the most advanced equipment available in the market with minimal cost accretion.

Indian offset policy has huge impact on all major procurements. Since its introduction in 2005, it has undergone many major revisions. The whole policy has turned out to be an amateurish and disjointed effort. It contains many unintelligible and indefinite provisions. Lack of effective monitoring mechanism of offset programmes is another area of concern. It will not be incorrect to state that the offset policy has proved to be a big encumbrance, without commensurate benefits.

Defence procurements in India are handled by functionaries drawn from the services,  bureaucracy and Defence Finance. They are not selected for any special educational qualification or demonstrated capability or displayed flair. They are assigned acquisition functions in routine. Most have no prior experience of handling military hardware and are unable to comprehend intricacies of competing technologies and their inter se evaluation. Worst, no training is imparted to them to prepare them for such critical appointments. This is the single most important reason for the failure of DPP to deliver. After all, a policy is as good as the people who implement it.

India signed a contract with DCNS of France for the construction of six Scorpene submarines at the Mazagon Dock Ltd with imported technology. DCNS is a government owned company and the deal was vigorously promoted by the French leadership, akin to government-to-government trade. Recent purchase of 36 Rafale fighter aircraft from the French government is considered to be a landmark deal.

Government-to-government route does have many major benefits. Most importantly, there are no middlemen. The price is generally reasonable as the seller government negotiates the price with the manufacturer. India is saved considerable time, effort and expenditure. With sovereign guarantees, quality, performance parameters and after sales support are assured. India gets complex weapon systems fully integrated and configured. Hence, this route is ideal in respect of the latest systems, which no other nation possesses or is ready to offer. It implies that the equipment should undisputedly be the best available and there should be no need to carry out comparative trials.

On the other hand, government-to-government deals suffer from some serious handicaps as well. All countries develop defence equipment keeping in mind their capabilities, doctrine and envisaged operational exploitation. It is not feasible for any seller to modify an existing weapon system to suit Indian parameters – both on account of expediency and economic considerations. If India wants any equipment, it has to accept it as it exists. In other words, it becomes a ‘take it or leave it’ situation.

In a multi-vendor environment, India can ask all vendors to submit techno-commercial proposals as per the parameters evolved by it to suit its operational needs. As it is a buyers’ market in the world arms trade, competition and market dynamics of multi-vendor open bidding allow a purchaser to drive hard bargains to get most favourable commercial terms through adroit negotiations.

India’s much hyped defence procurement procedure is based on the fundamental principle of transparency, free competition and impartiality. On the other hand, every government-to-government deal violates the said principle. It must nonetheless be admitted here that even DPP recognises the fact that the standard procedure cannot be followed in cases where procurements are required to be done from friendly foreign countries on a single vendor basis on mutually agreed terms between the two governments.

Whereas the desirability of procuring equipment in an open and competitive environment cannot be disputed, government-to-government deals prove beneficial for complex hi-tech defence systems. India gets the benefit of the seller country’s experience as regards logistic support, training and operational exploitation.

Such deals are invariably based on politico-military decisions. These include accruing geo-strategic advantages; imperatives of strategic partnerships; and major diplomatic, political, economic, technological and military benefits. In other words, government-to-government deals promote national foreign policy objectives and generally form a part of larger packages to cement ties between the two countries.

Government-to-government route precludes wider competition and trials. Thus, this route should be adopted after due diligence and not as a matter of routine convenience. It should normally be adopted to procure cutting-edge equipment that is unavailable from any alternate source. Absence of middlemen is another factor of overriding consideration. Allegations of corruption and slush money have been plaguing every deal concluded with business houses.

As Franklin D. Roosevelt said, “It is common sense to take a method and try it. If it fails, admit it frankly and try another. But above all, try something.” The current system has been in place for 15 years and has failed to deliver. A complete change-over is overdue. Minor modifications and cosmetic changes mean little and result only in self-illusion and complacency. Government-to-government route should be an exception rather than the rule. India must curb its penchant for resorting to this route to circumvent convolutions of DPP. There is no substitute for a well-evolved procurement procedure.*****
Posted by BRIG HEMANT MAHAJAN at 09:44 No comments: 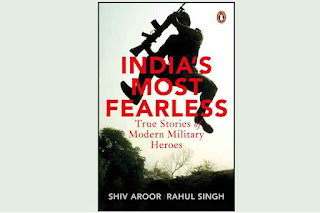 Posted by BRIG HEMANT MAHAJAN at 21:33 No comments:

These glorious insults are from an era when cleverness with words was still valued, before a great proportion of insults became 4-letter words.

1. The exchange between Churchill & Lady Astor: She said, "If you were my husband I'd give you poison," and he said, "If you were my wife, I'd drink it."
2. A member of Parliament to Disraeli: "Sir, you will either die on the gallows or of some unspeakable disease." "That depends, Sir," said Disraeli, "whether I embrace your policies or your mistress."
3. "He has all the virtues I dislike and none of the vices I admire." -- Winston Churchill
4. "A modest little person, with much to be modest about." -- Winston Churchill
5. "I have never killed a man, but I have read many obituaries with great pleasure." -- Clarence Darrow
6. "He has never been known to use a word that might send a reader to the dictionary." -- William Faulkner (about Ernest Hemingway).

"Poor Faulkner. Does he really think big emotions come from big words?" -- Ernest Hemingway (about William Faulkner)
7. "Thank you for sending me a copy of your book; I'll waste no time reading it." -- Moses Hadas
8. "I didn't attend the funeral, but I sent a nice letter saying I approved of it." --Mark Twain
9. "He has no enemies, but is intensely disliked by his friends." -- Oscar Wilde
10. "I am enclosing two tickets to the FIRST NIGHT of my new play; bring a friend... if you have one." -- George Bernard Shaw to Winston Churchill

"Cannot possibly attend first night, will attend second... if there is one." -- Winston Churchill, in response.
11. "I feel so miserable without you; it's almost like having you here." -- Stephen Bishop
12. "He is a self-made man and worships his creator." -- John Bright
13. "I've just learned about his illness. Let's hope it's nothing trivial." -- Irvin S. Cobb
14. "He is not only dull himself, he is the cause of dullness in others." -- Samuel Johnson
15. "There's nothing wrong with you that reincarnation won't cure." -- Jack E. Leonard
16. "They never open their mouths without subtracting from the sum of human knowledge." -- Thomas Brackett Reed
17. "In order to avoid being called a flirt, she always yielded easily." -- Charles, Count Talleyrand
18. "He loves nature in spite of what it did to him." -- Forrest Tucker
19. "Why do you sit there looking like an envelope without any address on it?" -- Mark Twain
20. "Some cause happiness wherever they go; others, whenever they go." -- Oscar Wilde
21. "He uses statistics as a drunken man uses lamp-posts... for support rather than illumination." -- Andrew Lang (1844-1912)
22. "He has Van Gogh's ear for music.." -- Billy Wilder
23. "I've had a perfectly wonderful evening. But this wasn't it." -- Groucho Marx
Posted by BRIG HEMANT MAHAJAN at 08:23 No comments: